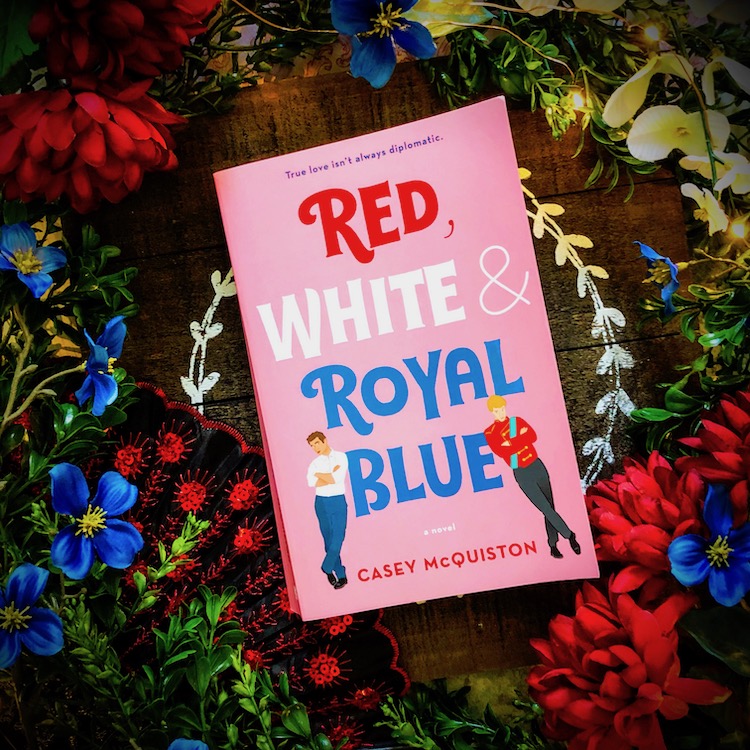 I watch a lot of Masterchef and Gordon Ramsay has an expression he says all the time I love: “Let’s get that right”. He always says it before he states a criticism …

I liked this book, let’s get that right.

But I didn’t love all of it.

This is an incredibly delicate and difficult position to be in when examining a much heralded, beloved and important book.

I considered not reviewing it, but I review books. It’s what I do. It’s how I put them to rest and remember them.

Red, White and Royal Blue is the political world that we want to live in … so painfully so that the fact we don’t, at times, depressed me while reading this! We follow Alex, the adult son of the first female president of The United States and Prince Henry, the stiff-upper-lip, beautiful, “spare” heir to the British throne. Both handsome young men hold a dislike for the other and when a public altercation involving the young men is leaked to the press… US and British international relations are in jeopardy.

To smooth things over both press teams concoct a fake friendship that involves Henry and Alex regularly meeting to pose as best friends … as enemies turn to friends, friends turns to lovers … things get very complicated. Especially with reelection looming and the press hovering.

This was one of the best enemies to lovers romantic comedies I’ve read. The love story between Alex and Henry is so genuine and so heartbreaking … love is love is love. I cannot stand that this has to be stated – that people can’t love who they love without fear or ostracism. But this is our world, and Casey McQuiston paints this heartbreaking truth very well here.

There is a lot of humour in this book and some very enjoyable characters – especially Henry (so much more going on beneath the facade), June (exposes how difficult it is to be a child of the most powerful person in the world, when it isn’t your choice or what you want to be), Zahra (the badest, toughest, kick-butt right hand lady I’d want at the president’s side), and my favourite Nora (the whip smart, sarcastic, bisexual heroine of the book).

But Alex. I didn’t really like him (wince). I thought he was mean, mean, mean. To Henry, to his sister, to his friends and arrogant (and not in the endearing way he was meant to be). While he is our main character and showed the most character growth, by the end it wasn’t enough for me.

I struggled with my sympathies for these young adults. I am disgusted by the media practices and hounding of children of politicians and celebrities and royals … all explored very well here. But in hypocrisy to that the book is full of their elaborate parties, jet-setting, all night blow out “drunkfests”, and “close down the museum after hours” privileges to really through a wrench in the sympathy meter.

Finally, the politics. I really got frustrated with the amount of politics shoved down our throats throughout this book. I found the sections with the politics to drag on and on and really slowed down the narrative and pace.

So while I struggled with some aspects here I truly loved Henry and Alex’s love story. It touched me, made me laugh, made me upset with the world and the treatment of LGBTQ persons, and ultimately left me hopeful that the ending Casey McQuiston painted for us could actually exist. I hope we are close. There is so much yet to be done and so much progress that has come — the existence of this book being one.

In all it is charming, it is fun, sexy, smart … but I struggled to like the main character and some major elements of the book. For me its a 3.5* read.

Cherylhttps://www.aotales.com
Welcome to And other tales. The little corner of the interweb where we don’t count cups of coffee, believe cancelling plans to stay home & read is just good life advice, refuse to acknowledge the calories in baked goods and will never judge you on the number of marshmallows in your hot chocolate or the size of your TBR piles. Curl up, get comfy and click through for book reviews, life chats, playlists, vegan & gluten free baking recipes, gift guides and more.
RELATED ARTICLES
Monthly Pick