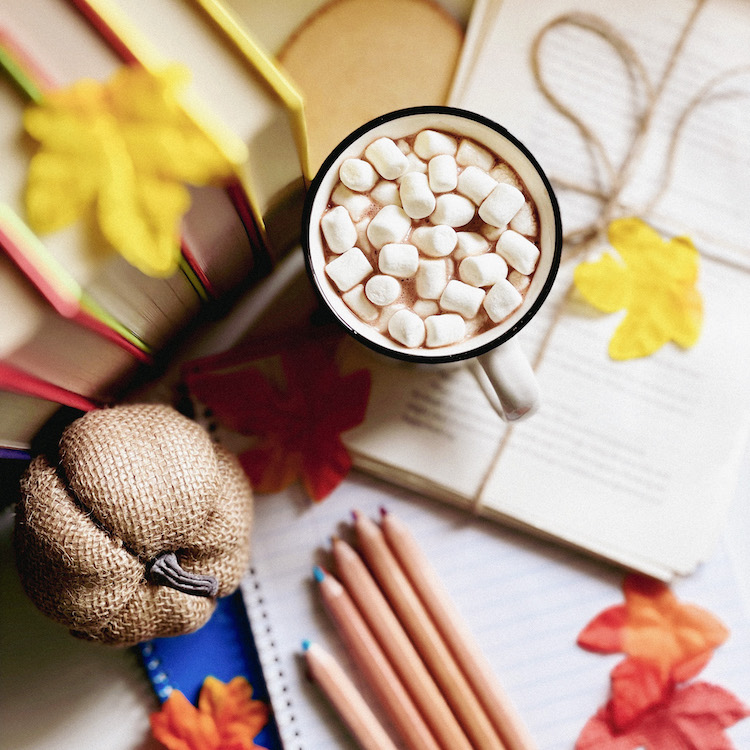 Time for Anticipated Fall Reads 2021 List #2! Focusing in on Middle Grade. If you missed my first anticipated fall article see here, but it’s pretty self explanatory: I love fall, fall is book publishing mega season, and therefore not one, but three separate anticipated reads list was necessary. Here we go with the genre close to my heart … Middle Grade!

Goodreads synopsis and expected publishing dates are given. 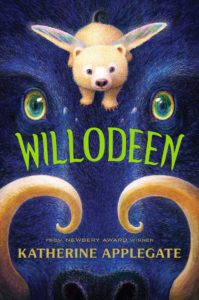 In stores September 7, from Feiwel & Friends.

Eleven-year-old Willodeen adores creatures of all kinds, but her favorites are the most unlovable beasts in the land: strange beasts known as “screechers.” The villagers of Perchance call them pests, even monsters, but Willodeen believes the animals serve a vital role in the complicated web of nature.

Lately, though, nature has seemed angry indeed. Perchance has been cursed with fires and mudslides, droughts and fevers, and even the annual migration of hummingbears, a source of local pride and income, has dwindled. For as long as anyone can remember, the tiny animals have overwintered in shimmering bubble nests perched atop blue willow trees, drawing tourists from far and wide. This year, however, not a single hummingbear has returned to Perchance, and no one knows why.

When a handmade birthday gift brings unexpected magic to Willodeen and her new friend, Connor, she’s determined to speak up for the animals she loves, and perhaps even uncover the answer to the mystery of the missing hummingbears. 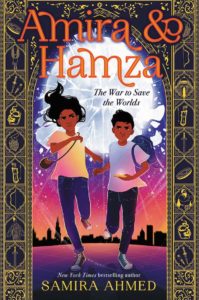 Amira & Hamza: The War to Save the Worlds

In stores September 28, from Little, Brown Books for Young Readers.

On the day of a rare super blue blood moon eclipse, twelve-year-old Amira and her little brother, Hamza, can’t stop their bickering while attending a special exhibit on medieval Islamic astronomy. While stargazer Amira is wowed by the amazing gadgets, a bored Hamza wanders off, stumbling across the mesmerizing and forbidden Box of the Moon. Amira can only watch in horror as Hamza grabs the defunct box and it springs to life, setting off a series of events that could shatter their world—literally.

Suddenly, day turns to night, everyone around Amira and Hamza falls under a sleep spell, and a chunk of the moon breaks off, hurtling toward them at lightning speed, as they come face-to-face with two otherworldly creatures: jinn.

The jinn reveal that the siblings have a role to play in an ancient prophecy. Together, they must journey to the mystical land of Qaf, battle a great evil, and end a civil war to prevent the moon—the stopper between realms—from breaking apart and unleashing terrifying jinn, devs, and ghuls onto earth. Or they might have to say goodbye to their parents and life as they know it, forever.… 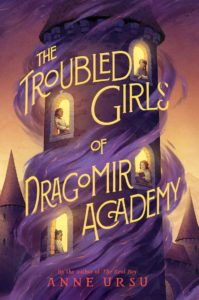 The Troubled Girls of Dragomir Academy

A fantasy about a kingdom beset by monsters, a mysterious school, and a girl caught in between them.

If no one notices Marya Lupu, is likely because of her brother, Luka. And that’s because of what everyone knows: that Luka is destined to become a sorcerer.

The Lupus might be from a small village far from the capital city of Illyria, but that doesn’t matter. Every young boy born in in the kingdom holds the potential for the rare ability to wield magic, to protect the country from the terrifying force known only as the Dread.

For all the hopes the family has for Luka, no one has any for Marya, who can never seem to do anything right. But even so, no one is prepared for the day that the sorcerers finally arrive to test Luka for magical ability, and Marya makes a terrible mistake. Nor the day after, when the Lupus receive a letter from a place called Dragomir Academy–a mysterious school for wayward young girls. Girls like Marya.

Soon she is a hundred miles from home, in a strange and unfamiliar place, surrounded by girls she’s never met. Dragomir Academy promises Marya and her classmates a chance to make something of themselves in service to one of the country’s powerful sorcerers. But as they learn how to fit into a world with no place for them, they begin to discover things about the magic the men of their country wield, as well as the Dread itself–things that threaten the precarious balance upon which Illyria is built. 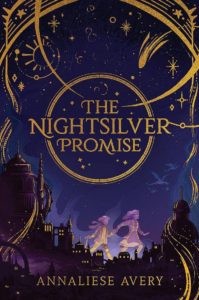 In stores November 2, from Scholastic Press.

London, the Empire of Albion. The Great Dragons of old are long-gone. Now the world is governed by the science of Celestial Physicists, and everyone’s life is foretold by the track on their wrist.

When thirteen-year-old Paisley discovers from her track that she is destined to die, the race is on to protect her dragon-touched brother and find her missing mother. But an ancient power stalks the sewers of London, and the Dark Dragon is rising, intent on restoring the Great Dragons and destroying Paisley’s family and her world forever.

In a world where science rules and dragons fear to tread, Paisley must trust her instincts and forge new friends, as she attempts to outrun fate itself. 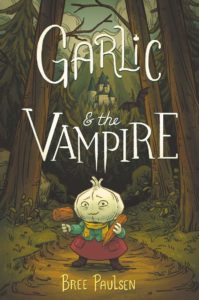 Garlic and the Vampire

Written and illustrated by Bree Paulsen

This adorable looking graphic novel had me with its cover alone! Garlic feels as though she’s always doing the wrong thing. No matter how much her friend Carrot and kindly Witch Agnes encourage her, Garlic just wants to tend her own garden, where it’s nice and safe.

But when her village of vegetable folk learns that a bloodthirsty vampire has moved into the nearby castle, they all agree that, in spite of her fear and self-doubt, Garlic is the obvious choice to confront him. And with everyone counting on her, Garlic reluctantly agrees to face the mysterious vampire, hoping she has what it takes.

After all, garlic drives away vampires . . . right? 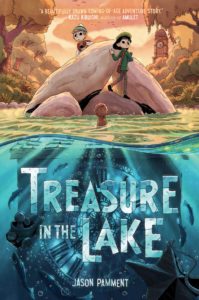 Treasure in the Lake

Written and illustrated by Jason Pamment

In stores September 7, from HarperAlley.

Grand adventures stories often begin where you least expect them…

Iris knows this because she’s read them all. However, as a thirteen-year-old stuck in the tiny town of Bugden, real adventure seems like a distant dream. But when Iris and her best friend, Sam, stumble upon an unusually dry river on the outskirts of town, they’re led to a discovery beyond anything Iris has ever read about: a hidden city and a forgotten tale of friendship.

In Jason Pamment’s middle grade graphic novel debut, perfect for fans of Hilda and This Was Our Pact, can Iris and Sam uncover the truth in time to keep their own friendship afloat, or will history repeat itself and pull them apart forever? 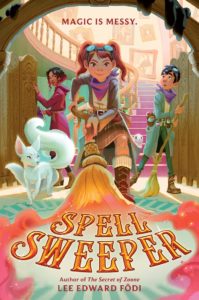 In stores November 30, from HarperCollins.

Most students at Dragonsong Academy spend their days practicing spells and wielding wands, but after flunking her sixth-grade standardized tests, Cara Moone is on the fast track to becoming a MOP (a.k.a. Magical Occurrence Purger). See, when a real wizard casts a spell, it leaves behind a residue called spell dust—which can be dangerous if not disposed of properly. It’s a MOP’s job to clean up the mess.

And no one makes more of a mess than Dragonsong Academy’s star student, Harlee. Widely believed to be the Chosen One who’s destined to save the magical world, she makes magic look easy. So of course she’s Cara’s sworn nemesis. Or she would be, if she even knew Cara existed.

But then Harlee’s spells begin to leave behind something far worse than spell dust: rifts in the fabric of magic itself. Soon Cara begins to suspect that the so-called “Chosen One” isn’t going to save the world. She’s going to destroy it. 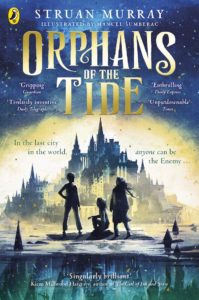 Orphans of the Tide

In stores December 14, from HarperCollins.

The City was built on a sharp mountain that jutted improbably from the sea, and the sea kept trying to claim it back. That grey morning, once the tide had retreated, a whale was found on a rooftop.

When a mysterious boy washes in with the tide, the citizens believe he’s the Enemy – the god who drowned the world – come again to cause untold chaos.

Only Ellie, a fearless young inventor living in a workshop crammed with curiosities, believes he’s innocent.

But the Enemy can take possession of any human body and the ruthless Inquisition are determined to destroy it forever.

To save the boy, Ellie must prove who he really is – even if that means revealing her own dangerous secret . . . 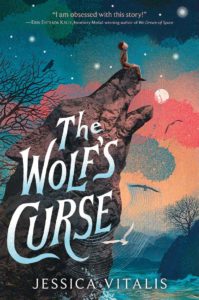 In stores September 21, from Greenwillow Books.

Twelve-year-old Gauge’s life has been cursed since the day he witnessed a Great White Wolf steal his grandpapá’s soul, preventing it from reaching the Sea-in-the-Sky and sailing into eternity. When the superstitious residents of Bouge-by-the-Sea accuse the boy of crying wolf, he joins forces with another orphan to prove his innocence. They navigate their shared grief in a journey that ultimately reveals life-changing truths about the wolf––and death. 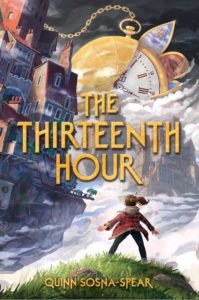 In stores October 26, from Simon & Schuster Books for Young Readers.

Twelve-year-old Rosemary has been an artist her whole life and especially loves drawing the incredible places from her Aunt Jo’s stories. But illustrating the stories doesn’t mean Rose believes them. And when Aunt Jo gives Rose a pocket watch with instructions on how to use it to access magical dream worlds, Rose just thinks Aunt Jo is being peculiar again.

While Rose is sleeping, however, she enters a fantastical place where each hour of the pocket watch takes her to a different world. There, Rose befriends a trio of outcasts with special powers and joins their war against the ominous Tall Man.

When a bully steals Rose’s watch, she can only look on in horror as dream and reality collide and he’s sucked into the Eleventh Hour. Now, Rosemary must gather magic from all twelve dream worlds to rescue the boy who makes her life a living nightmare.

Any purchases made via retailer links provided in this article may result in this site receiving a share of that sale, which is very much appreciated!

Cherylhttps://www.aotales.com
Welcome to And other tales. The little corner of the interweb where we don’t count cups of coffee, believe cancelling plans to stay home & read is just good life advice, refuse to acknowledge the calories in baked goods and will never judge you on the number of marshmallows in your hot chocolate or the size of your TBR piles. Curl up, get comfy and click through for book reviews, life chats, playlists, vegan & gluten free baking recipes, gift guides and more.
RELATED ARTICLES
OwlCrate Jr.