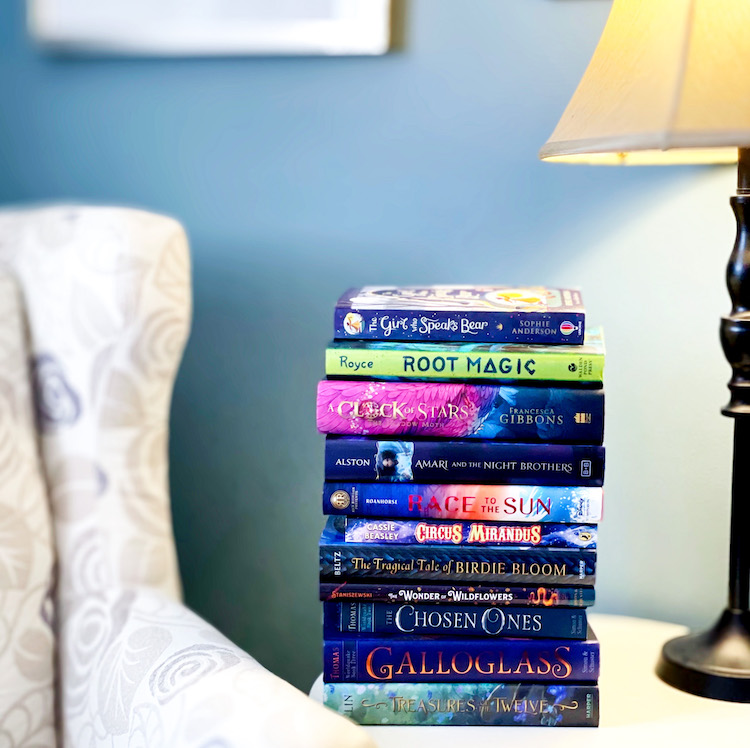 We’ve been on a bit of book buying binge in this house … really, we always are … but here’s a look at all the middle grade we’ve amassed in the first two months of 2021! (I shared a January book haul recently that includes my non-middle grade titles that I’ve acquired, if you’re interested in seeing my full shame!)

A few new release middle grades in this stack, but mostly my daughter and I were catching up some series sequels and old release MG that missed our notice – full list, with synopsis below: (I won’t share synopsis of the sequels to avoid any spoilers!)

The Girl Who Speaks Bear 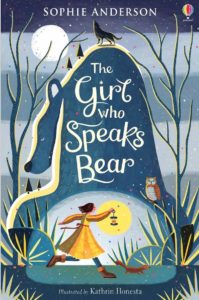 I couldn’t resist adding this beautifully illustrated, wintery read to our winter TBR! Found abandoned in a bear cave as a baby, 12-year-old Yanka has always felt out of place in her small village. When she wakes up to find that her legs have become bear legs, she sets off into the forest to discover who she is, on a journey that takes her from icy rivers to smouldering mountains, with an ever-growing group of misfits alongside her. This debut historical fiction ghost story is going to travel us back to the 1960s South Carolina and enchant us with a read full of friendship and Black Girl Magic. School integration has arrived in South Carolina and twins, Jezebel and Jay Turner, will be starting the school year at a new school with completely new faces. But the biggest change is to come on their eleventh birthday, when their Uncle Doc tells them it is time for them to learn Root Magic. As evil – human and inhuman – surrounds her town, Jez will find she needs every bit of magic she has to get through.

A Clock of Stars: The Shadow Moth 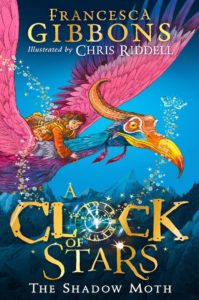 When something is blurbed as Mary Poppins meets Narnia … my interest is definitely piqued and I am SO glad OwlCrate Jr included this book in their December 2020 crate (a few boxes are still available on the site!) Imogen should be nice to her little sister Marie. She should be nice to her mum’s boyfriend too. And she certainly shouldn’t follow a strange silver moth through a door in a tree. But then… who does what they’re told? Followed by Marie, Imogen finds herself falling into a magical kingdom where the two sisters are swept up in a thrilling race against time – helped by the spoiled prince of the kingdom, a dancing bear, a very grumpy hunter… and even the stars above them.

Amari and the Night Brothers We are halfway through this wonderful middle grade and are hooked! If magical schools and supernatural beings of all kinds are your jam, you’ll want to grab this one! When Amari Peters’ older brother Quinton disappears, she is shocked to discover no one really cares and that the police assume he was up to something illegal. Then she discovers a ticking briefcase in his closet meant for her and a nomination form for a summer tryout at the Secretive Bureau of Supernatural Affairs. Determined to find out what happened to Quinton, Amari sets out to compete for a spot … it’s just going to be a bit strange getting used to her Weredragon roommate and the fact that mermaids, dwarves, yetis, and magicians are, in fact, real.

Race to the Sun After reading and being blown away by Roanhorse’s Black Sun this past fall, I definitely wanted to read anything by this talented author. Double win that this middle grade is also under the Rick Riordan umbrella! From Goodreads: Lately, seventh grader Nizhoni Begay has been able to detect monsters, like that man in the fancy suit who was in the bleachers at her basketball game. Turns out he’s Mr. Charles, her dad’s new boss at the oil and gas company, and he’s alarmingly interested in Nizhoni and her brother, Mac, their Navajo heritage, and the legend of the Hero Twins. Nizhoni knows he’s a threat, but her father won’t believe her. When Dad disappears the next day, leaving behind a message that says “Run!”, the siblings and Nizhoni’s best friend, Davery, are thrust into a rescue mission that can only be accomplished with the help of Diné Holy People, all disguised as quirky characters. Their aid will come at a price: the kids must pass a series of trials in which it seems like nature itself is out to kill them. If Nizhoni, Mac, and Davery can reach the House of the Sun, they will be outfitted with what they need to defeat the ancient monsters Mr. Charles has unleashed. But it will take more than weapons for Nizhoni to become the hero she was destined to be . . . 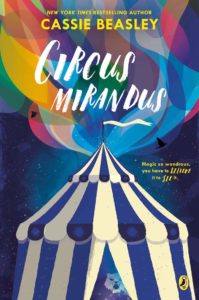 This middle grade series was released a few years before my daughter and I ventured into the genre, but it sounds fantastic and I can’t wait to jump in! Even though his awful Great-Aunt Gertrudis doesn’t approve, Micah Tuttle believes in the stories his dying Grandpa Ephraim tells him of the magical Circus Mirandus: the invisible tiger guarding the gates, the beautiful flying birdwoman, and the magician more powerful than any other—the Man Who Bends Light. Finally, Grandpa Ephraim offers proof. The Circus is real. And the Lightbender owes Ephraim a miracle. With his friend Jenny Mendoza in tow, Micah sets out to find the Circus and the man he believes will save his grandfather. The only problem is, the Lightbender doesn’t want to keep his promise. And now it’s up to Micah to get the miracle he came for.

The Tragical Tale of Birdie Bloom 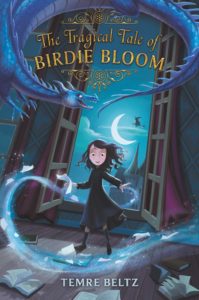 I think what appealed to me so much about this story is that it is narrated by the book itself, I can’t resist! It also gave me a bit of Nevermoor vibes and the “cursed children of Eventide” as this story centres around orphans and the universally accepted law that they will meet miserable endings… Birdie Bloom is a Tragical—an orphan doomed to an unhappy ending. Agnes Prunella Crunch is a witch. The wicked kind. In Wanderly, a meeting between a witch and a Tragical can only end one way: tragically. But lately, Birdie and Agnes have both been searching for something more. And with the help of some mysterious Winds, a few wayward letters, and a very unusual book, they might just find the kingdom’s unlikeliest friendship—and together, rewrite their story for good.

The Wonder of Wildflowers A story about a young girl struggling to “fit-in” amid a fantastical setting that sets up great conversations on bullying and immigration law & prejudice, this itty bitty middle grade has the potential to hit me like The List of Things That Will Not Change by Rebecca Stead. Here we follow ten year old Mira who immigrated to Amberland when she was five. All these years later, her and her family have almost reached citizenship status, which means they’ll be able to drink the sacred Amber that grants all citizens magic, conformity and sameness. Finally she’ll be able to fit in and be like everyone else … but will it be worth it? 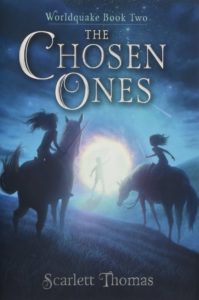 Books 2 & 3 of the Worldquake Series

Dragon’s Green has been one of my daughter’s and my favourite middle grade discoveries! Here’s a synopsis of book one: Dragon’s Green follows Effie Truelove, a believer of all things magical, guided by her gruff, cantankerous, wise … and magical … grandfather. When a tragedy suddenly threatens her grandfather’s life, Effie is given an unusual ring and the dying message of “Find Dragon’s Green”. As Effie is propelled into the dangerous world of the Diveri, a book and magic stealing society, she must rely on the help of her new found talents, new found magic and new found friends to save the books, the world and herself! Travelling from their current dystopian world to the Otherworld and the Underworld, Effie and her friends try to stay one step ahead of their pursuers.

You can find them here:

Bookshop.org (The Chosen Ones)

Treasures of the Twelve 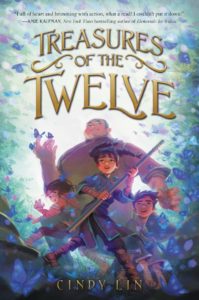 My daughter and I adored The Twelve – an OwlCrate Jr. pick from 2019 – and highly recommend this fun fantasy adventure steeped in mythology. Here’s a synopsis for book one: Usagi has special zodiac gifts bestowed upon her by being born in the year of the rabbit. She can hear the smallest sound miles away, she can leap great distances, but she must keep these talents hidden. Under the vicious rule of The Dragonlord, anyone with zodiac abilities have gone into hiding after he slaughtered The Twelve, the zodiac gifted, and her parents. When Usagi’s sister and best friend are captured, she narrowly escapes herself … thanks to the help of three young strangers. Now to save her sister she must journey with these rescuers – the heirs of the twelve – to Mount Jade in order to hone her rabbit skills and train to become an elite warrior. As she learns from the powerful teacher, known only as The Tigress, new mysteries are discovered and Usagi’s loyalties, beliefs and courage will be tested.