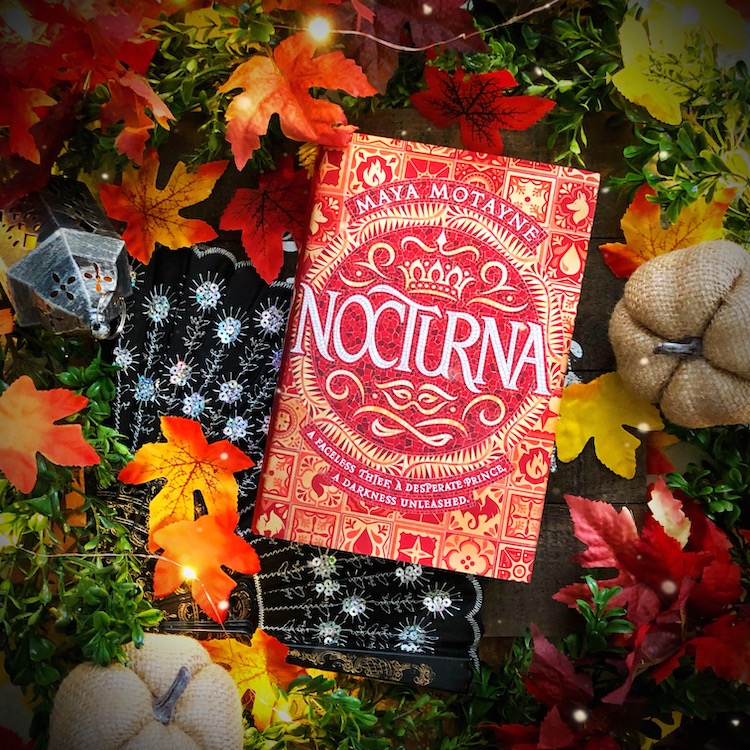 There are a lot of heated, polarizing opinions regarding this novel – luckily I fell into the category of enjoying it!

Nocturna takes us into a Latinx inspired fantasy world of Mundo following two main protagonists: conflicted Crown Prince Alfie and sassy thief Finn. In the Kingdom of Castallan everyone possesses some form of elemental magic – manipulating earth, fire, wind, or water. Few others have propio, an extra level of magic that can vary from manipulating ones face (like Finn) to siphoning off another’s propio, or seeing the strands of magic and teleport (Alfie).

After the disappearance (and assumed death) of his beloved brother Dex, Alfie has become determined to bring him back from the dark void he was banished to – travelling the world to find answers. Meanwhile Finn is on the run from a painful and abusive past thieving her way from one place to another – always assuming a new face/identity each time. Their paths cross one night when Alfie desperately and unknowingly releases a powerful, magical being in exchange for saving his cherished cousin Luka while Finn happens to be roaming the Palace halls hunting for a great magical cloak.

The two venture onto a dangerous quest to stop this dark magical being before he brings about Nocturna – a blanketing of darkness over the world and enslavement of all people.

While some argue that Nocturna is simply a knock-off of A Darker Shade of Magic, I really didn’t find that to be the case. (Yes, I have read both). I really think it is challenging to say any novel is 100% original, especially so in fantasy YA where so many elements are shared. Yes Alfie uses a magicked doorknob to travel from place to place among threads of coloured magic and yes Kell uses a magicked cloak + his blood to travel between stacked, parallel Londons … but V.E Schwab didn’t invent teleportation anymore than Maya Motayne or Sarah J Maas.

The other popular criticism is it isn’t Latinx enough. This one I have trouble commenting on because it was written by a Latinx woman who, after being sick of not seeing her heritage represented in a fantasy novel, decided to write it herself. If it is Latinx enough for the Latinx author … I think that is good enough for me! Right?

However, I would’ve loved more. More of that Latinx world, more of the rich history … I really felt greedy and hungry for more world development and hopefully the future instalments will provide this.

I really liked the characters of Finn and Alfie. Both well rounded, with painful secrets and pasts and insecurities and darkness, that find a shared connection within each other that doesn’t necessarily fall into the romance category. I truly adore that, if this is a romance throughout the series, it is definitely a slow burn and formed from enemies to true friends … and maybe lovers? You’ll have to read it to form your interpretation.

I found the magic system enjoyable, a little complicated and yet complicated enough for entertainment and believability. Excellent rounded characters,  fantastic evil enemy, and a very satisfying ending that has me hoping for the sequel. The only complaint I have is wanting more development of that Latinx world, not enough for me to deduct a star though!

I was highly entertained.