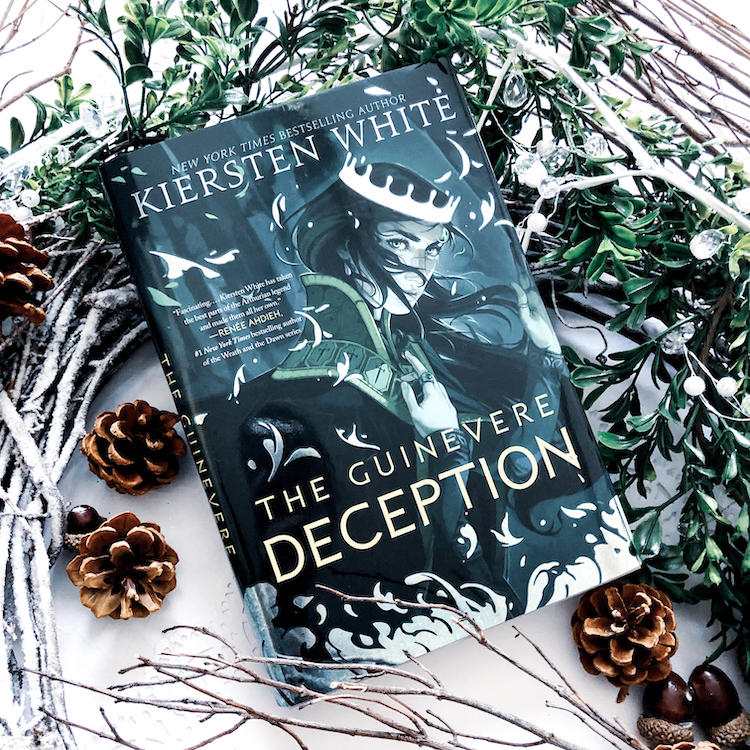 In this unique take on the tale of King Arthur and his wondrous city of Camelot, we follow Guinevere, a young witch coming into her power under the tutelage of the great Merlin. With dark magic constantly threatening the borders of Camelot, Merlin has sent Guinevere to protect the young King.

The problem? Magic has been banned in the city of Camelot and anyone caught practicing faces banishment or even death. Further, Guinevere is not who she says she is but rather a changeling who has taken on the identity of another. Knights, magic, tournaments, trials, dragons and evil forests all combine in this reimagining of the Arthurian legend, centring around one mysterious girl who is just learning her own power.

Honestly, none of these characters lept off the page for me … as much as I wanted them to. Guinevere came across naive and honestly quite spacey at times. This may be a factor of her upbringing – isolated in the forest with Merlin that resulted in her not understanding human interaction and, well hell, basic human bodily functioning. But it just really grated on my nerves.

Arthur was ok, he was fine … he was also flat and forgettable. While I did enjoy his sweetness he did often sway into the saccharine for me. While it may not the full fault of this particular book, but I get sick of “the chosen one” storyline in which characters are just blessedly stronger, smarter, braver, luckier than all other characters. If I’m going to connect or care for a character I need to see them struggle, have conflict, a developed back story … and who has a better back story than Arthur? But that was highly overlooked.

Guinevere’s maid, Brangien, and Arthur’s cousin Mordred showed some promise and were the most interesting of characters. Unfortunately they remained just that … periphery characters that dance around Guinevere and Arthur.

Let’s talk what worked (and didn’t):

I am getting tired of the “wait for the big ending” story arc. I wholeheartedly agree with Goodreads reviewer Emily May, if I have to wait until the last 10% of a book for the action and plot to really take over … then I’ve just read a book that is 90% bad. It doesn’t work for me and unfortunately I am seeing this more and more.

I don’t know if this is a factor of the trilogy aspect in YA Fantasy – stretching out the action as much as possible to set up sequels, but whatever the reason, The Guinevere Deception dragged its heals. Nothing really happened until the last 80-some pages. We follow Guinevere through tedious, almost painstakingly boring daily nothings. The characters mostly fell flat, really a factor of the story they were placed in that lacked any plot for them to develop.

I found the setting was easily visualized, but likely a lot of that is built on our own knowledge of the stories like The Sword and the Stone, Robin Hood, etc. So while I found the world building easy to visualize, I truly think most of this came from my own experiences and nothing to do with the story itself.

There is a part of this book that I really, truly loved … I can’t say anything about it because it is a major spoiler and I’ll leave it for you to discover and enjoy. I’ll just say this … Lancelot.

Let’s talk the power of women and sexism:

I really appreciated Kiersten White’s discussion here of the power of women and their ignored potential and capability. All of these women were strong and hindered by the constraints of their sex and time. I understood where she was going, but I don’t feel it always worked. Many times sexism was just non-existent. Simply writing sexism out of its time context really just left the whole feeling false. Especially the few times sexist behaviour was thrown in, it had me wondering “which is it?”.

While I was really excited for a Camelot-centred retelling it was a disappointing read for me. It really drags for 90% and while it does have a more climatic ending, I don’t feel that it was worth the wait. Further I really loathe this slow-reveal style of plotting. The love-triangle romance was frustrating and too much time spent here that could’ve been spent on the characters, who were rushed and flat. The world just … was … and never expanded upon. Disappointed.