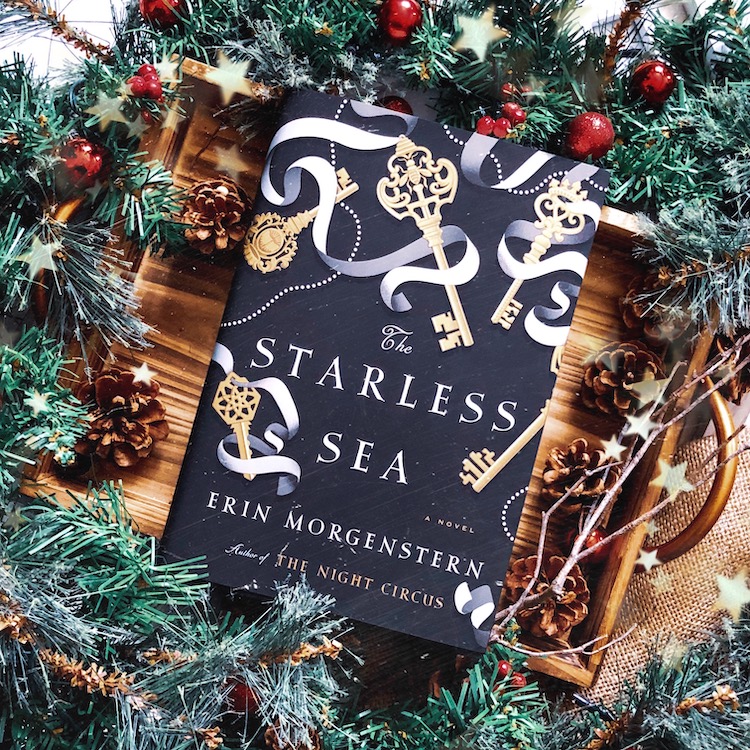 “Be brave,” she says. “Be bold. Be loud. Never change for anyone but yourself. Any soul worth their star-stuff will take the whole package as is and however it grows.”

I think it is safe to start out saying The Starless Sea isn’t going to be for everyone. For example, if non-linear timelines drive you a bit batty … this won’t be for you. If meandering, lush, detailed prose isn’t your style, then this will be a tough 500 page chew.

Below the Earth’s surface awaits an enchanted, mystical labyrinth of a library with stories stacked upon stories. Reading nooks. Cozy chairs. Magically lit candles and fireplaces. The shores of a starless sea … and cats. Lots and lots of cats.

Much like Narnia, doors appear throughout the world that allow passage to this magical place – if you are brave enough to enter. Zachary Ezra Rawlins missed the chance at his door when he was young, now as an accomplished 25 year old scholar, he is determined to track down his missed opportunity. After discovering an unassuming, ancient book of stories in his University library, he begins a journey of hunting down clues to find this enchanted place. Guided by two strangers – Mirabel and Dorian – Zachary plunges into the absurd, the fantastical, and often perilous underworld of stories, soon discovering he is a key player in this library’s destiny, and that there are many set upon its destruction.

I had extremely high expectations going into this book – being my most anticipated of 2019. It didn’t disappoint, but it didn’t spectacularly deliver either. At least not on my first read. Now that I have completed the journey and look back upon the pages, that which confused and frustrated is quite clear to me. But that doesn’t mean it wasn’t frustrating going through the story initially.

Erin Morgenstern interjects other tales and seemingly random and non-connected stories to distract from the main plot. I found this tiresome at times and was just generally, overwhelmingly, confused. The first 300 pages for me were often a struggle, until it really broke free and then was unapologetically flawless.

I feel it unnecessary to discuss character development because Erin is a master. Even through my struggles at the beginning, the characters are so dynamic. The world so vivid, so imaginative. She forces me to pause and really piece together what she is describing and it is truly magnificent. Zachary is so bloody likeable as is Dorian, Mirabel, his fortune-teller mother, his college roommate Kat … even the cats. The tales of love, loss, heartache, and hope are absolutely unforgettable.

This will be a book I re-read. When I do, it will undoubtably be 5 stars. But for the initial read I spent half of the time frustrated and confused and the other half in awe. Heck, maybe that was the point.

Lush and beautifully described – a true love story for the lovers of stories.

“May I ask you a question?”

“You may, but I might not have the answer, or if I have an answer if might not be the right one or a good one. Questions and answers don’t always fit together like puzzle pieces.”