Review: We Hunt the Flame 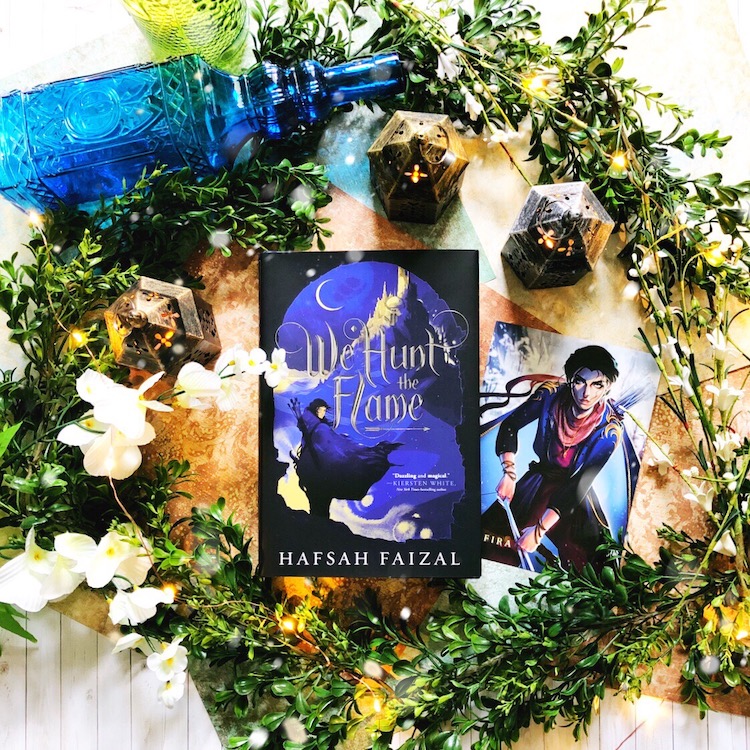 “He didn’t live. He existed. And no one understood the difference between the two until they ceased to live.”

I’m going to start this review by discussing that quote above. I can 100% say no line in any book I’ve ever read has resonated with me as powerfully as this. I connected to what Nasir was conveying with this sentiment so strongly … as I think anyone who has or is suffering from depression or daily anxiety can attest to. Most days it isn’t thriving, it’s surviving … and this is very different than living.

So since this was on page 14 I thought I was in for a real treat of a book, but I struggled so much to get into We Hunt the Flame. I eventually had to put it aside. The aforementioned anxiety for me is storms, and since it is thunderstorm season, I think this played a strong part. My attention was elsewhere.

But what continually pulled me out of the story was the constant replacing of words with Arabic, that had me consistently shifting to the massive glossary just to know what she was talking about/what was happening. This luckily gets much better as the novel continues on as she uses the same Arabic terms throughout, so they become familiar.

I gave it a second chance.

While I still struggled with pacing, (I am very particular about pacing, as you probably know), at times the adventure would be moving swiftly and then it would stall out. Add to the need for constant glossary checking … it really pulled me out of the story at times.

Nasir, (the prince and assassin for the Sultan), teams up with Altair, (his nemesis and the Sultans general) to find the Hunter who will lead them to the “jawarat” that will restore magic to Arawiya. Meanwhile the Hunter – huntress Zafira – has teamed up with her best friend Deen to venture to the dark and dangerous Sharr to retrieve said artifact.

It takes a very long time – 193 pages in fact – for these characters to finally meet up and go about their adventure. But once they do the story really fires up and I really enjoyed it from there.

I loved these characters – from the tortured Nasir, to the strong-as-nails Zafira, to the comedic Altair … all hiding secrets, intelligence, and emotions. They meet up with two more strong characters along the way as well as a host of obstacles/demons. I can’t say a lot more for risk of ruining it but the novel goes places I did not anticipate and the ending was surprising.

Overall I struggled heavily with the lagging first 200 pages, but was entertained by the last 260 … I liked the complicated, well rounded characters, the enemies to lovers trope, and the strong leading ladies. It maybe wasn’t revolutionarily different YA fantasy but on the whole a really strong world and I am excited to see where it goes in the sequel.