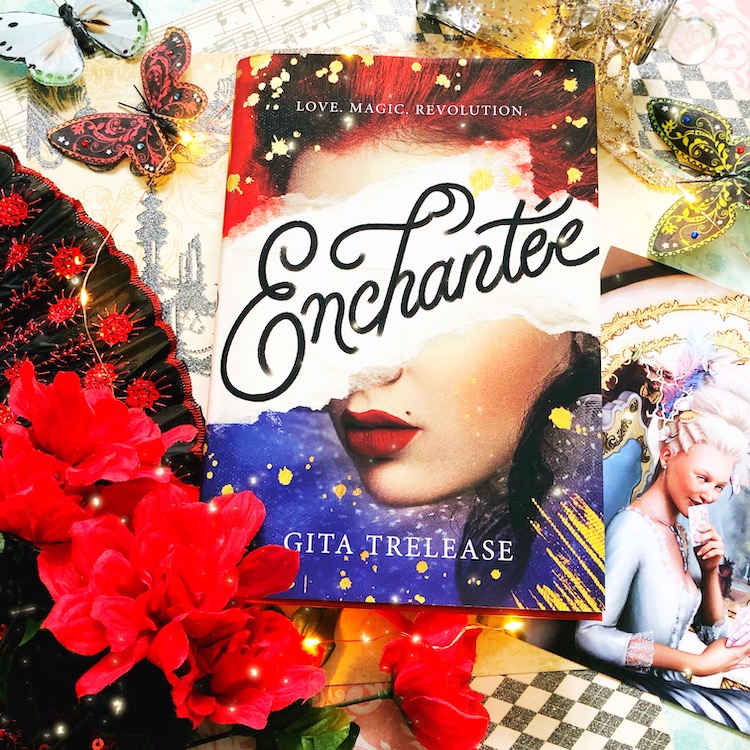 Ok. I admit. I love a story set in the the court of Marie Antionette and Louis XVI. I don’t know what it is about this particular era of history – the court, the dazzlement, the grandiose excess, the discrepancy between the wealthy and the poor (not a lot of different than today – in fact the gap between the wealthy and poor is greater today than this time period, we just take slightly better care of our poor … digression, sorry).

If you, like me, are intrigued by this time period then this is a book you’ll want to read.

Author Gita Trelease captures the feeling of 1798 Paris on the brink of the French Revolution as she takes us from the grimy streets to the opulent courts of the aristocracy.

Smallpox has claimed the lives of both Camille’s beloved parents and she, along with her younger sister Sophie and alcoholic brother, are left to fend for themselves in the severe, unforgiving world of 18th Century Paris. Camille, like her mother, posses le magie (magic) and is able to turn simple metal into coin allowing her small family to barely survive.

When her alcoholic, abusive, gambling addicted brother steals all the money she has saved Camille turns to greater magic in order to infiltrate the luxurious courts of Louis XVI and Marie Antionette. Here she gambles using her magic to try and build a better life for her and Sophie. But the traps are greater at court, the longer she stays the more le magie demands of her, and the harder it becomes to hold prejudices against all nobles … specifically the handsome Lazare, aspiring inventor, balloonist, and visionary. While France teeters on the brink of its bloody Revolution, Camille must choose who side she’s on – magic or reality, peasant or noble – while fighting for love.

I just enjoyed myself so much with Enchantee. I found the magic system to be simple, yet believable. From the opulent court to the dirty streets, the world of Paris was thoroughly painted.

Camille’s inner struggles between magic and truth, privilege versus democracy, and her preconceived prejudice’s against all nobles, made her well rounded and likeable. The romance is enjoyable and Lazare is also written with depth – carrying his own hidden struggles and passions in this changing environment.

The side characters were less fleshed out but still entertaining – especially Chandon (friend at court) and Rosier (balloonist friend and reporter). While Sophie was naive and quite shallow for most of the book, she really wasn’t in it enough to ruin the flow.

I did keep waiting for the book to really burst forth and fully dazzle, but it was still just a delightful, undemanding treat of a book and an exemplar of a stand alone done right. A thoroughly entertaining, feel-good book that has enough brevity and honesty to keep it from being fluff.