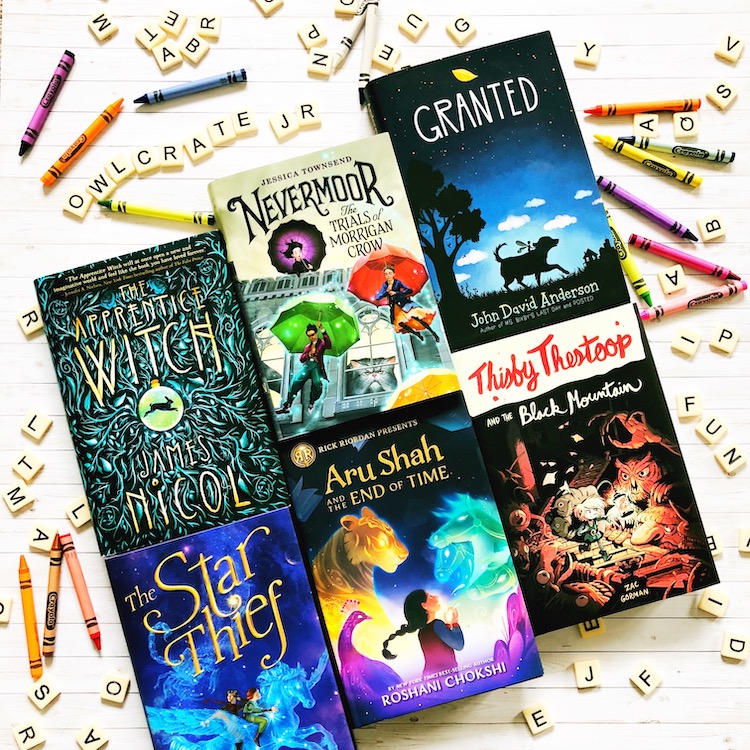 But if we had to pick … in the “you’ve got a gun pointed at you pick your favs now” kind of way. (Which is an analogy I truly loathe but can’t think of another right now … I apologize).

Here are 6 my crew and I can wholeheartedly recommend:

1. Nevermoor by Jessica Townsend: Likely my favourite middle grade of all … so move on? JK. I can see why people compare this to Harry Potter. While it might not be 100% HP, it builds a world in the same way HP did. Nevermoor was a world I wanted to stay in, a megacat I wanted to adopt, and Jupiter was a character I missed terribly when we finished. One thing I wouldn’t want to do is ride a magical train dangling from an umbrella … but that’s about it. Found family, found strength, magic, friends, and a talking, ginormous, cantankerous cat. Sublime.

2. The Apprentice Witch by James Nicol: This was our very first middle grade read together and therefore holds a special place in our book-loving hearts. This is an excellent witch story – and it’s actually quite spooky at times. Arianwyn is wholly likeable young witch struggling with self doubt and uncertainty in her new role as the town witch of Lull. But she develops friendships, courage and confidence as she battles mysterious & dangerous hexes, spirits, and enemies. A little girl-girl hate that I abhor and some kids may be sensitive to the fact that Arianwyn is living alone at a very young age with no guardian … but if you can suspend belief it works much like any other Disney movie.

3. Granted by John David Anderson: Pure sweet joy. That’s Granted in three words. You have magical, wish “granting” fairies named after flowers trying to help human wishes to come true. Granted explores what makes a wish a “good” wish, the greedy nature of humans, fairness, friendship, perseverance and ultimately hope. Warning: there is a sweet talking Labrador retriever that will make you cry, guaranteed. Ophelia Delphinium Fidgets is a fantastic, spunky force of a character and we fell absolutely in love with her adventure.

4. The Star Thief by Lindsey Becker: This book is a rare treat. A stand-alone that includes amazing adventure, amazing imagination, amazing pacing that wraps up in one book. Here we have a heroine who goes on an epic adventure to find the truth of her family, where constellations come alive, and evil/good steampunk flying warships fight to harvest the power of the stars. And Honorine is at the centre of the battle. It’s truly a feast of imagination and adventure.

5. Aru Shah and the End of Time by Roshani Chokshi: I got a serious kick of out Aru – an honestly realistic, flawed preteen who often needs to lie or “stretch the truth” to fit in. A very realistic character trait most kids can relate to … and TBH adults. Her lies catch up to her as she accidentally sets about the end of the world, freezing everyone in time. It is up to her and her Pandava sister to save the world, while they battle and explore the Indian Gods. Excellent adventure and an interesting look into Indian mythology … all while wearing Spider-Man pyjamas.

6. Thisby Thestoop and the Black Mountain by Zac Gorman: How do I explain the feast of imagination that is Thisby Thestoop? A spirited little girl is responsible for caring for all things beastie, spooky, and uncommon in the dungeon underneath the palace on Black Mountain. When a tarasque is “accidently” awoken and a spoiled princess winds up lost, the dungeon falls into chaos and it is up to Thisby and the lost Princess Iphigenia to make things right. Again a fabulously imaginative, excellently adventurous, and somewhat grotesque story that highlights strong girls and throws the spoiled princess trope on its ear.

Cherylhttps://www.aotales.com
Welcome to And other tales. The little corner of the interweb where we don’t count cups of coffee, believe cancelling plans to stay home & read is just good life advice, refuse to acknowledge the calories in baked goods and will never judge you on the number of marshmallows in your hot chocolate or the size of your TBR piles. Curl up, get comfy and click through for book reviews, life chats, playlists, vegan & gluten free baking recipes, gift guides and more.
RELATED ARTICLES
OwlCrate Jr.